A Japanese-American Sculptor and designer, Isamu Noguchi was born in Los Angeles in 1904 from a Poet father, Yone Noguchi and a writer mother, Leonie Gilmour. He grew up in  and spent his teenage years in America where he studied medicine at Columbia University while simultaneously following sculpture lessons. In 1924, he studied at the Leonardo da Vincit Art School of New York. His life is a succession of travels between East and West. « My father, Yone Noguchi is Japanese and his poetry has been known for a long time as being a translation from East to West. Il would like to do the same for sculpture. », he wrote in his scholarship application letter to the Guggenheim Foundation that he got in 1927.

Isamu Noguchi first discovered Western avant-garde in New York, then becoming the assistant of Constantin Brâncusi in 1927 in Paris, he goes on to study the Chinese art of the brush and work on clay in Japan. He realized stage decors, namely for the choreographer Martha Graham from 1944 to 1988 and worked together with the Knoll company (see the cylinder lamp table and the cyclone table).

His help is requested by the Nippo-American authorities after World War II to revive the city of Gifu, a traditional center for the paper industry. He will then reinvent the lantern with his famous paper and bamboo Akari created between 1951 and 1986 (see the Akari lamp collection in bark paper). The sculptural style, the organic shapes and the sense of emptiness and simplicity of Isamu Noguchi will have a lasting influence on the design of the . The sculptor died in New York in 1988. 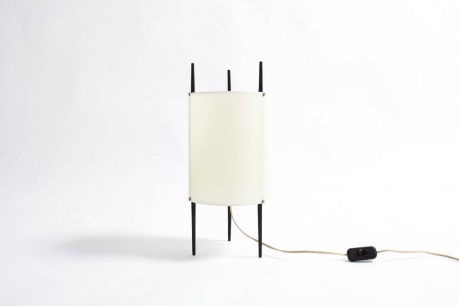